Critical Acclaim For The Devil's Claw

The Devil's Claw  is a striking first effort by Nick Pignatelli. The action is constantly propelling  forward, never frustrating or distracting the reader from the plot unfolding before him. Pignatelli presses all the right buttons. His is a broad landscape, from World War II Europe, to the post-war, forested mountains of Colorado, to the modern-day bucolic peaks and isolated valleys of New York State's Adirondacks.

He spotlights the dangers of the military-industrial complex, the frailties of the human ego, the realities of government run amuck, and the perils of mad science, a sort of "Frankenstein Redux". The difference here is that Pignatelli's story is much more appealing, realistic, and current than Shelley's original. And, sad to say, much more probable. But whatever the future may bring, the world has Nick Pignatelli to thank for the eloquent and exciting warning.

Pignatelli’s gripping first novel, The Devil’s Claw, opens during WWII in German-occupied France, leading off with an action sequence worthy of a great war movie. In fact, the characters and descriptions are so accurate and visual, it seemed like I was watching a film.
From there the story never slows down, embarking on a journey across space and time to present day in the Adirondack Mountains. There, a secret government facility is working on a long-forgotten Nazi research project -- a project that in the hands of inept scientists goes terribly, horribly wrong. And from there things get worse . . .
Pignatelli’s nonstop action and clever plot twists kept me turning pages. I read The Devil’s Claw in two sittings, and the ending didn’t disappoint. I found Pignatelli’s research of WWII weapons and aircraft excellent, as was his editing -- something that is often lacking in many popular works these days. A recommended read.

Nick Pignatelli's debut thriller,The Devil's Claw,is a page-turner reminiscent of Clive Cussler's best. His 'villains' will disturb your sleep or keep the woodsmen among you sleepless, listening for their heavy tread or high-pitched call from the Forest Primeval.

-- Robert Knightly, author of the novels, Bodies In Winter  and The Cold Room.

A novel with a split personality--part thriller and part historical fiction. This is a debut author you cannot miss.This is an interesting story to say the least, it's unlike most thrillers, thus making it difficult to pinpoint the sub-genre that best classifies it. Pignatelli's writing is crisp and thought provoking. It's clear that this storyline is much more than it seems. This debut intelligently fuses together an obviously well researched timeline of historical, fictional, and some fantasy events.
The Devil's Claw will likely appeal to fans of Tom Clancy, Larry Bond, and Joseph Heller. With a slightly academic undertone amidst the suspense--readers will surely enjoy the moralistic and didactic feel of the story. Overall an excellent debut--you'll be hooked!

Click here to order your copy
in paperback or for Kindle on
Amazon.com

In 2008, the wreckage of an aircraft lost decades earlier on the other side of the world turns up in Colorado's Medicine Bow Mountains...

In 2015, Jennifer Pruitt stumbles into a secret government project gone awry while vacationing in the woods of New York's Adirondack Mountains and now runs for her life, hunted by something that cannot possibly exist...

What is the deadly secret that connects these events?

Master Sergeant Sean Foster leads a Special Forces team into the remote wilderness on a mission to locate Pruitt before she reveals what she saw. Unbeknownst to Foster, an overwhelming force of ruthless assassins with a different mission is shadowing his team. They intend to exterminate Pruitt for being in the wrong place at the wrong time, and Foster's men are fair game if they get in their way.

Will Foster follow orders or his conscience when he finds himself in the crosshairs of a government cover-up? It may not matter as the nightmare Pruitt stumbled upon closes in, threatening to wipe them all out before the day is over.

The tranquil wilderness of New York's Adirondack Mountains explodes with rapid-fire action in a thriller spanning seventy years in the blink of an eye...

to the official site of author 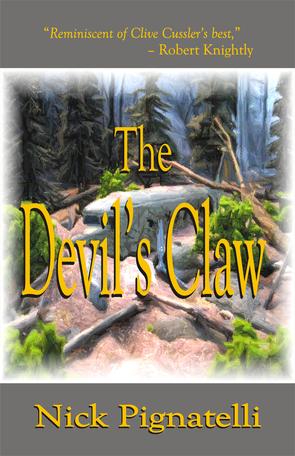 Available in paperback and ebook